The Nigerian Association of Resident Doctors (NARD) has directed its members to embark on nationwide strike beginning from Thursday, April 1, 2021. 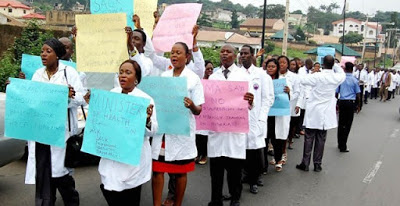 The directive was contained in a communique  issued at the end of its National Executive Council (NEC) meeting attended by over 50 chapters of NARD.

According to the communique, the NEC unanimously agreed that NARD should proceed on a total and indefinite strike on April 1, 2021, by 8am if the government failed to meet its demand.

One one the demands, according to the doctors, was immediate payment of all salaries owed to all house officers, including March salaries (regardless of quota system) before the end of business on March 31, 2021.

They also demanded immediate payment of all salary arrears, including March salaries for members in all Federal (GIFMIS platform) and State Tertiary Health Institutions across the country, especially ASUTH, IMSUTH and UNIMEDTH.

The doctors are demanding an upward review of the current hazard allowance to 50% of consolidated basic salaries of all health workers and payment of the outstanding COVID – 19 inducement allowance, especially in State owned-tertiary Institutions.

NARD further demanded an abolishment of the exorbitant bench fees being paid by its members on outside postings in all Training Institutions across the country with immediate effect.

The resident doctors had embarked on strike during last September to demand for implementation of agreement reached with government.