Home NEWS I live along the expressways to make kidnapping easy for me –...
19
SHARES
ShareTweet

20-year-old suspected kidnapper, Ahmad Muhammad, pictured above, has told men of the Osun State Police Command that he decided to live along expressways so that it will be easy for himself and other members of his gang to abduct their victims at will. 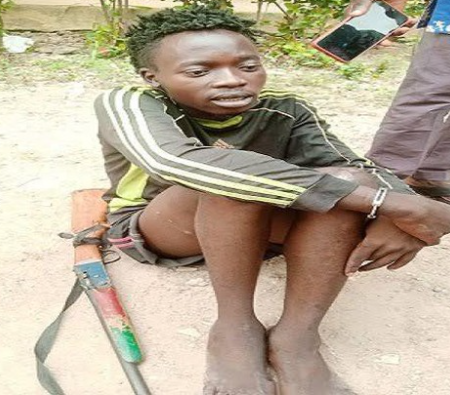 Muhammad, who is from Tambuwal community in Sokoto State, was arrested at Wasinmi, a village along Ife/Ibadan Expressway.
While being paraded at the police headquarters in Osogbo, the state capital, Muhammad said hewis a member of a seven-man gang of kidnappers who abducted passengers on the expressway, adding that he was arrested during a shoot-out with police.

It was easy for the police to arrest me because I don’t know the routes in that bush and I could not trace my steps to the place where my other gang members escaped to.”

He said his other gang members are Fulanis and gave their names as Alhaji, Buba, Siraju, Sadiq, Saidu.

“My gang members are all Fulani and they are not new in the business, it is a means of survival. I don’t have a shelter, I live along the expressway. I live on the road to make operation ease” Muhammad said