A true gentleman would introduce you to his parents. 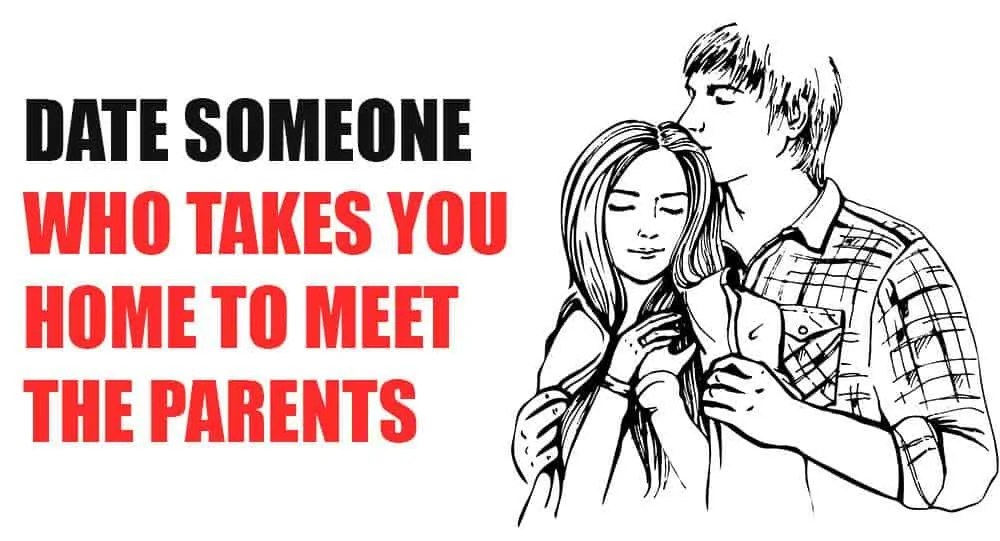 You should never have to be put in a position to choose between the man that you’re dating and the people you love the most in the world: your family. You should always be worthy of the kind of relationship wherein your man actually puts in the effort to have your family like him. He shouldn’t be shying away from the occasion to meet your parents and your siblings. Another thing, you shouldn’t have to date someone who is ashamed of taking you home to meet his parents as well. He should want to show you off to the world, especially to the people who mean the most to him. He should want to brandish you like a prize because that’s what you are. You are a gem in this man’s life and you know that you are worthy of whatever recognition that is set upon you. You know that you deserve the opportunity to meet his parents, and his hesitation has given you second doubts about the relationship. If you’re not good enough for him to bring home to his parents, does that mean that he’s not as invested in this relationship as you are? If he’s not willing to go home and meet your parents, does that mean that he doesn’t really care about the people you most care about?

Time is something precious. It is life’s most sought after commodity. That is why it’s important for you to be dating a man who knows and values whatever time you spend together. Parents are not going to be around forever. The clock is ticking and that is time wasted. If he is hesitant to bring you home and spend some quality time with the people who raised him, then that should give you a fairly good idea of where he stands in the relationship. It doesn’t bother him at all that you’re losing the opportunity to spend valuable quality time with the people who mean the most to him in the world. If he truly believed that he was going to be spending his entire life with you in love and in romance, then he wouldn’t be wasting his time by not taking you home to meet the future in-laws. He wouldn’t be deliberately squandering every opportunity for you to get closer to the people who helped shape him to become the man that he is today. The very fact that he keeps putting this important milestone off should make you worry. Perhaps he doesn’t see this relationship in the same lens that you do.

Maybe it’s time for you to start rethinking the relationship that you’re in. Maybe you should start reexamining the ins and outs of your relationship and whether this is really something that you want. Do you really want to be in a relationship with someone who seems undecided? Who seems fickle-minded? Do you want to continue playing games with a person who just can’t seem to take that next big step with you? Who seems hesitant and scared? Will you allow yourself to stay stagnant and watch life pass you by because you have to wait for someone who just doesn’t want to move forward? The most probable answer to this equation is no, this relationship is not worth sticking around for.

The guy you should be dating is someone who isn’t afraid of bringing you home to meet the family. You should be dating a man who sees you as his future and he knows that you are going to be his eventual family too. He wouldn’t want to waste another second of not having you integrate yourself into his current family before you start building a family for yourselves. He wants to give you a glimpse of what family life with him would look like. He doesn’t want to blindside you with anything and he knows how important family is to you.

You have to be with someone who isn’t afraid to go with you to meet your parents. You have to be dating someone who actually puts in the effort necessary to win the affections of the people who you love and who matter the most to you. He knows how important your family is to you and he would never take that for granted. He would always make a conscious choice to have your family know that he will take care of you and that you are in safe hands. He would want to meet the parents who managed to raise such a beautiful girl who stole his heart.

You can’t afford to be dating someone who only wants you for himself. You don’t want the kind of relationship that is secretive. You don’t deserve to be locked away in the confines of a man’s personal space. When you’re truly in love with someone, you will want to integrate worlds with that person. You have to be with someone who is willing to include you in various aspects of his life.

You want to be with someone who wants to play a huge part in your life, and who never fails to meet expectations.

Most Men Are Scared Of Intelligent Women. Here’s why.