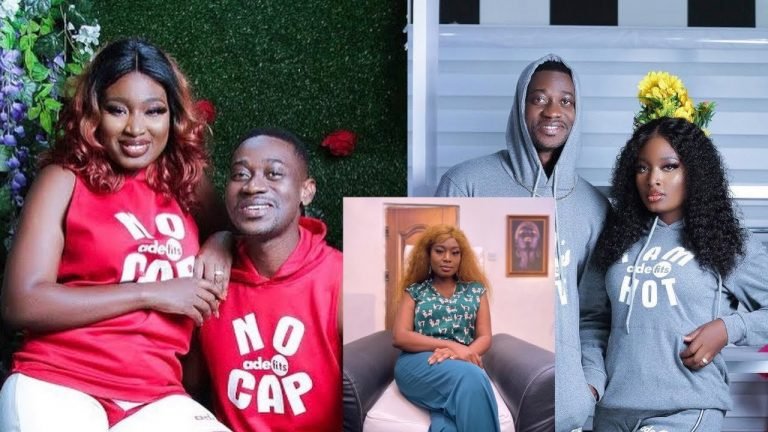 Nollywood actress Adebimpe Oyebade has opened up on her relationship with Nollywood actor Lateef Adedimeji.

The actress recently engaged in a question and answered session on his Instagram page, where she urged her fans to ask anything they will like to know about her.

However, a curious fan insisted on knowing what is happening between the Nollywood actress and her alleged boyfriend, Lateef Adedimeji. This comes amidst several speculations that the Nollywood stars are in a romantic relationship.

Reacting to the question, the actress stated that they are not keeping their fans in suspense and what they are doing is just love.

See the conversation below:

The fan wrote, “Let’s know exactly what is happening between you and Lateef. You are just keeping us in suspense”.

In reaction, the actress stated that they are not keeping their fans in suspense and they are just being themselves.

Mo’Bimoe wrote, “We’re not keeping you in suspense. Just doing us

According to reports by Sunday Scoop, the movie star would rather keep mum about the speculations of marriage and pregnancy trailing her.

“People want to know my relationship status but the only thing I have to say is that wedding, pregnancy or anything good cannot be hidden forever. One way or the other, people would find out. I don’t like to be pressurised, even though I feel like doing it. When people talk to me, the first thing they ask is if I am married to Lateef Adedimeji. I do not deny that fact that he is very important to me and also the closest person to me. But at every point, people want to know what is happening between us. I am not tired of that actually because I know that I would still get lots of it,” she said.

Mobimpe also lamented on some of the things fame has robbed her of.

She recalled, “Being an actress has robbed me of some of the things I used to do. Going out or going to the market and doing some things are no longer easy to do. A while ago, I went shopping and some of the sellers raised the prices of some goods because they said they liked my films and didn’t want to be to beat the price of the goods down. I eventually spent all the cash I took to the market.”

“As an entertainer, I am different from what people see online. People don’t seem to know that ‘Bimpe Oyebade’ is actually different from ‘Mo Bimpe’. I could be in a place for 24 hours and nobody would know that I was around.  As a brand ambassador, I don’t have a choice but to work. However, I don’t usually attend social gatherings because I don’t know how to keep up with people.  A lot of people don’t understand this, so they feel I am proud or not happy for others but that’s not me. Maybe I would change in 2021 though.”

Last year, Nigerians have begged celebrity lovers, Adedimeji Lateef and Oyebade Adebimpe to get married after they shared lovely photos of them rocking matching outfits on their respective Instagram pages.

You would recall that Lateef and Mo Bimpe ignited marriage rumors in July as the posts wedding pictures after acting as a couple in Yoruba movie Adeobimpe omo oba in 2019.

Sharing the photos, she wrote

“Happy new month from me and mine to you all,”

Adedimeji also shared the same pictures on his Instagram page.

“Happy new month from me and mine @mo_bimpe to you,” he wrote.

Ushering themselves into the new month on December 1, the lovers shared loved-up photos of themselves wearing the same dress and fans who were excited to see how compatible they were together pleaded with them to marry each other as soon as possible.

One Kemi wrote “All these your play play shoots ehn..your two should just be serious and marry abeg”

One Rambo wrote “Please get married already, A tale of the king, leading the queen out of the den, like Mufasa and Sarabi, testing waters and leading from the front… Stepping out to win, rule and conquer… Roll the carpet, make way for the king of swag and the queen of drip

One Ola Yetty wrote “You two are so compatible, get married already please”

“Try And Appreciate People Who Gossip About You, It’s Not Easy For Them To Leave Their Problem” – Mercy Aigbe.