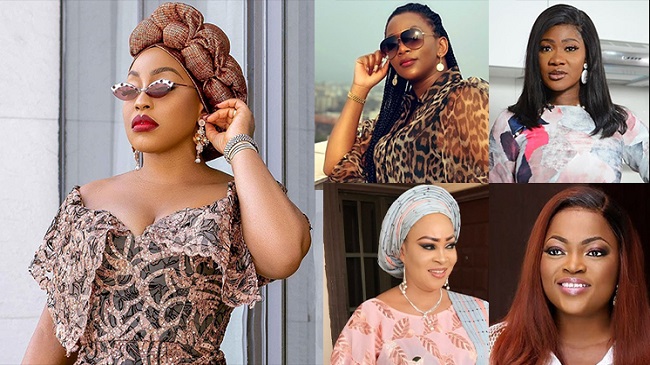 This post is specially made to filter out the actresses that are successful in their acting career and at the same time wealthy, those that got their wealth from acting in Nollywood movies.

Nollywood has been the umbrella that houses the Nigerian actors and actresses, it is the body that oversees the production and approval of Nigerian movies also comes in handy when Nigerian entertainers are in dare need of help.

We have been talking about Nigerian talents for quite some time now, the comedian, actors, actress and so on, you can do well to make use of our search box to find anything about the Nigerian entertainment world.

This list comprises of the Nigerian actress that have gained global recognition, the A-list actresses and those at the top of their games due to hard works, experience and other factors. They are well-known celebrities that have been making waves for decades, you see them often on your TV screen, red carpet, award nominations and so on.

Mind you, we have some Nollywood actress that has a huge sum of money which will not be listed here, we are strictly basing this list on those that have established their names and knows their onions well.

Without taking much of your time, let us go straight to the topic of the day as we list for you the top ten richest actresses in Nigeria today.

Top 10 Most Successful Actresses In Nigeria 2021

Here is the list of the most successful Nollywood actresses in Nigeria currently, check them out.

Rita Dominic is a big wig as far as the Nigerian movie industry is concerned, she is a veteran in the business of acting and she is from the South Eastern region of Nigeria, Imo state to be precise. Her acting is focused on the Nollywood English version and no doubt, she is a force to reckon with and a source of inspiration to upcoming actresses.

She was born on the 12th of December 1975 into a royal family and the youngest of four children. She studied Theatre Arts at the University of Port Harcourt in Rivers state where she obtained her Bachelor’s Degree. She is also one of the most beautiful Nollywood actresses in Nigeria.

Rita Dominic has acted in over 200 movies and still counting of which some of her movies where she starred are My Guy, Yankee Girls, Suru Lere, The Intruder, Prisoner of Love, Children of Terror and many more. Rita Dominic is considered the most successful actress in Nigeria with a net worth of over ₦950 Million.

Genevieve Nnaji is a very popular actress in the Nigerian movie industry, she is also one of the most successful actresses in Nigeria as we speak and from Imo state. She gained global recognition after her movie “Lionheart” was acquired by NETFLIX and this brought her through milestones of wealth and success in her career.

As the second most successful actress in Nollywood, she attained this through rigorous hard works which has earned her a lot in the industry, she is one of the Nigerian actresses with the highest endorsement deals and also one of the most beautiful actresses in Nigeria today.

Genevieve Nnaji is an actress by profession, a producer, director and also formerly a model, sh has the stature and beauty which attracts fans and movie producers and this seems to have contributed to her success, never forget she is also very talented and experienced.

Recognized with the honor of a Member of the Order of the Federal Republic by the Nigerian government for her contribution to Nollywood, she has really contributed immensely to the success of Nollywood and she deserves some accolades for that.

Born on the 28th of December 1984 in Lagos state South-Western region of Nigeria, Her career officially began in the year 2004 and since then she has been at the top of her game.  and has been on set since 2004 till date. Mercy Johson began acting as a made and she has played a lot of male roles, she is very good at it and also a lady from a poor background role is well interpreted by her.

When it comes to acting, Mercy Johnson is one of the best, she interprets her roles as if it is a real-life thing, lots of awards have been won by this pretty actress and still waxing strong in the Nigerian Movie industry.

Some of the movies she featured in are The Maid, House Party, Dumebi, Under the Sky, Into Temptation, Thy Will Be Done, Baby Oku in America and so on. Mercy Johnson is one of the most respected Nollywood actress in Nigeria.

Omotola Jalade is one of the best celebrities in Nigeria, she is a beautiful damsel and every Nollywood movie lovers loves to see her on their screen, Omotola started her career journey in 1995 and since then has been one of the exceptional actress in Nollywood, her success is huge and she is well revered in the society.

She is ranked as one of the most successful actress in Nigeria and so far has featured in over 300 movies, she has a huge fanbase and also making huge money from her social media pages like Facebook, Instagram, Twitter which placed her among the celebrities with the highest followers in Nigeria.

Omotola Jolade Ekeinde is happily married to her husband and the union is blessed with four kids.

Funke Akindele is currently the hottest Nollywood Yoruba actress following the new release of her series Jenifas Diary which is rated the best TV Series in Nigeria. She is no doubt the best Yoruba actress due to the numerous awards she has won in that category and beyond, she also starred in the TV series “I Need To Know” sponsored by the United Nations.

Funke Akindele a.k.a Jenifa has done well for herself, She was born on the 24th of December 1977 in Ikorodu Lagos State Nigeria. She had her higher institution at UNILAg where she studied LAW and also had her OND in Mass Communication.

She is one of the most successful Nollywood actresses in Nigeria and these are attributed to her consistency, hard work and contribution to Nollywood for years now. She got rewarded as the Best Actress in a Leading Role (AMAA). Her comedy-like roles paved way for her in the movie industry and she is a very talented and beautiful actress.

Funke has a lot of endorsement deals and awards to her name, she is currently married to the rapper JJC Skillz and they are blessed with twins.

Ini Edo is one of the most sought for actress in Nigeria, she is a talented, beautiful and elegant actress, she is a veteran in Nollywood and has been doing so well for herself.

As a talented beautiful actress with natural beauty, Ini Edo has played her part in uplifting the Nigerian movie industry, she has gained a lot of recognition both home and abroad.

Ini Edo started her acting career in 2003 and since then has been so prolific, she has won a lot of awards, numerous nominations and also big endorsement deals with top companies like GLO Nigeria.

You might not see her in most movies but believe me, Clarion Chukwura is one of the most successful actresses in Nigeria, she has been in the game for decades and one of the prominent actresses in Nollywood till date. The few movies she has featured in are evergreen and this alone has taken her far in the journey of acting.

Some of the movies she featured in are Farewell to Babylon, Apaye, Money Power, Forbidden Choice, Caught in the Act, Fiery Force and many more.

Daniella Okeke is another successful actress in Nollywood, she had a wonderful acting career, she is rated as one of the most beautiful Nollywood actress. She is so talented, skillful and intelligent, this has helped her to attain greatness so quickly and has won numerous awards for herself coupled with other nominations.

Patience Okonkwor a.k.a “Mama G” is a veteran Nollywood actress and one of the richest and most influential Nollywood actress. Mama G is a source of inspiration to a lot of upcoming actress.

She is known to always act mean roles and also some comedy roles. She is a mother and grandma and yet she looks so young and beautiful, she has done well for herself and has obtained a lot of sponsorship deals likewise she is the present ambassador to Glo Nigeria.

As one of the oldest Nollywood actress she is filled with experience in the field and has featured in over 150 movies, she doesn’t only act, she is also into fashion designing, music and had invested in some businesses. Patience Ozokwor hails from Enugu State, South Eastern region of Nigeria.

Bukky Wright is a beautiful Nollywood actress, she made the list of the top ten most successful Nollywood actress due to her contribution in the Nigerian movie industry. She started acting in 1996 and has been into acting for decades, she is filled with experience and had gotten every reward she deserved while at it.

Bukky won the best Nollywood Actress of the Year in 2011, she acts both Nollywood English and Yoruba version, also seen in most TV series with the most popular f them all which is Super Story.

She has acted in more than 200 movies and she isn’t only into acting, she is also a businesswoman. All wealth gathered frow] what she does make her achieve this feat.