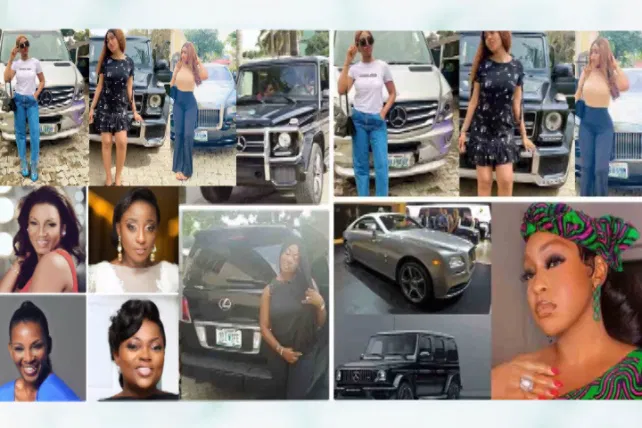 In this article I will be sharing with you the top 10 most richest actresses in Nigeria in 2021. Nigerian women have been in the Nigerian movie industry popularly known as Nollywood for years, and many of them have held it down and are still as relevant as they were 15 to 20 years ago. Of course, the movie industry in Nigeria has seen many actresses and has bid many actresses farewell. But there are some women, married or not, who have carried the torch out of Nigeria and even into the international industry.

Who run the world? Women right? From home videos to International movies, these women have had a rewarding career and some are still upcoming and are new into the scene. So not to waste much of your time, after a careful study and research I present to you the top 10 most richest actresses in Nigeria in 2021 and their net worth.

Uche Jombo is te 10th richest actress in Nigeria. She has been in the Nigeria movie industry for over two decades. She is currently married to her Mexican boyfriend. She is one of the most popular Nollywood actresses who have been around in the industry for a very long time. She is a movie producer and also a Globacom brand Ambassador. She has been nominated for the Africa Movie Academy Award for Best Actress in a Leading Role. She has produced movies like Nollywood Hustlers, Damages and Holding Hope. She has an estimated net worth of $2.1 million.

Stephanie Okereke is the 9th richest actress in Nigeria in 2021. She has been in the movie industry for over two decades. She is regarded as the best outspoken Nollywood actress with over 250 movies to her credit. In 2002, she became the first runner up for the Most Beautiful Girl in Nigeria beauty pageant. She is regarded as one of the most accomplished actresses in Nollywood. She has an estimated net worth of $2.3 million.

Chika Ike is the eighth richest actress in Nigeria in 2021. Chika Ike is one of the industrious actresses in Nigeria. In 2014, Chika Ike spent millions of naira shopping in Turkey, Dubai and London, shopping on some of the most expensive designer shops and having a good time cruising in Yacht. Chika Ike is no doubt one of the richest actresses in Nigeria. She is currently the UN Ambassador for Displaced persons and also the brand ambassador for Bullet energy drink.  She has an estimated net worth of $2.5 million. She has been rumored to be dating Nigerian billionaire Prince Ned Nwoko.

Mary Remmy Njoku is the 7th richest actress in Nigeria in 2021. She made it this far on this list because of her husband. She and her husband Jason Njoku have combined together to take Nollywood business to the next level. In 2011, Mary Remmy Njoku started dating Jason Njoku who is the CEO and founder of Iroko TV and ROK TV. They got married on 18th August 2012 in Lagos. That union was the real turning point in Mary Remmy Njoku’s career as she is now the CEO of ROK Studios which is a film production studio and TV channel based in Lagos. She has an estimated net worth of $2.7 million.

Funke Akindele is the sixth richest actress in Nigeria in 2021. She is popularly known as Jenifer due to her role in Jenfa Diary.  Funke Akindele is one of the most popular and most influential actress of Yoruba decent. In 2009, she won the Africa Movie Academy Award for Best Actress in comedy following her role in Jenifer. She has been described as the best comic actress in Nigeria. She has an estimated net worth of $2.9 million.

Rita Dominic is the fifth richest actress in Nigeria in 2021. She is a Nollywood popular actress, model, producer, entrepreneur and a television personality. She hails from Imo State in the south eastern part of Nigeria. She has been described as one of the most successful actresses in Nigeria and also one of the most beautiful actress in Nigeria. She is currently planning to get married. She has an estimated net worth of $3 million.

Rita Dominic is another actress who has been in the game for over two decades. She has been in several movies and she used to be one of Nollywood’s most sought after actress. She has received many awards and recognitions over the years and has positioned herself as one who believes in women empowerment.

Rita Dominic owns a Mercedes-Benz ML 350 4matic. This car is powered by a 3.5 Litre V6 engine that churns out 302 horsepower and 237 lb-ft of torque. It comes with amazing in-built features that make it a top choice for Nigerian roads. The Mercedes-Benz cost her up to N9 million to acquire.

She also owns a Mercedes-Benz G-Wagon. This wagon is powered by a 4.0 turbo V8 engine that produces 416 horsepower. She purchased the white G-wagon herself and it cost her a sum of N65 million.

Regina Daniels is the fourth richest actress in Nigeria in 2021. She topped the list after she got married to Nigerian billionaire Prince Ned Nwoko. Regina Daniels became very popular when her relationship between her and Ned Nwoko hit the social media. She is a Nollywood Actress but she has not been in the movie industry for a long time like the others on the list. What puts her here is her union to Ned Nwoko, who is a billionaire in Nigeria, and this has pushed her net worth in 2021 to over $3.2 million making her the fourth richest actresses in Nigeria.

Regina Daniels has been seen on social media posing with high-end luxury cars, but some of them are not hers, but belongs to her husband. Regina Daniels owns a 2016 Mercedes-Benz GLK450. The Mercedes-Benz GLK450 has a 3.0 Litre V6 turbocharged engine that produces a 362 horsepower and 369 lb-ft of torque. It can go from 0 to 60 mph in 6.6 seconds. Regina Daniel’s Mercedes-Benz has a customer plate number reading, 4EVA 16, which means forever 16.  To get this car she spend nothing less than N24.77 million.

Regina Daniels also owns a Lexus RX300. She gifted herself the Lexus when she got admission to study at the prestigious Igbenedion University in Benin. The brand new 2018 Lexus RX300 costs her nothing less than N20.9 million.

Regina Daniels also own a Brabus Adventure Mercedes-Benz G-wagon. To get this car Regina Daniels spent nothing less than N110 million. The Brabus is a sleek but solid looking SUV that is powered by a 3.0 Litre V8 engine. The luxury car can only be acquired by the rich and mighty.

Omotola has been in the acting industry for over two decades. She is well known in Nigeria and even internationally. She is also known as a curvaceous actress because of her figure, and beauty. Omotola is married to a successful Pilot. Omotola Jalade-Ekeinde is a brand ambassador for many brands in Nigeria and also an Ambassador to some international agencies.

She also owns a Limousine. It is unknown whether Omotola owns the limousine but she is often seen in it attending media events and cruising around town. Maybe it’s her personal possession or it’s rented, it is unknown at the moment of writing this report. She has been listed by Time Magazine as one of the most influential women in the world.

Mercy Johnson is the second richest actress in Nigeria in 2021. She is a popular Nollywood actress, model, producer, entrepreneur and television personality. She hails from Kogi State in the south southern part of Nigeria. She has been described as one of the most accomplished actress in Nigeria. She is currently married with four lovely kids. She has an estimated net worth of $4.6 million.

Mercy Johnson Okojie has acted in over 100 movies since joining the Nigerian movie industry. The Kogi state Actress has been engaged with at the very least 150 movies since the time she came into the acting industry in Nigeria. She is hitched with 3 children to a Prince from Edo state. Mercy Johnson charge nothing less than N2 million per movie role.

Mercy Johnson owns a Lexus SUV. She was given a Lexus SUV by her husband as a pushing out gift. The car came with a customized plate number reading, Odi wife and it was the baddest trim of the car model at the time of purchase. The Lexus SUV is powered by a 5.7 Litre V8 engine, and some in-built safety and technology enhanced features. The car cost her husband N15 million at the time.

She also owns a 2013 Range Rover Sport. This car was also gifted to her by her husband, after the two had gotten married. The 2013 Range Rover sport has two types of engines; A standard 5.0 Litre V8 engine that produces a horsepower of 375 and 375 lb-ft of torque, and a supercharged engine of 5.0 Litre V8 that produces a 510 horsepower and 461 lb-ft of torque. It cost her husband N20 million to acquire it at the time.

Genevieve Nnaji is the richest actresses in Nigeria in 2021. In 2005, she won the Africa Movie Academy Award for Best Actress in Nigeria. She has been honored with Member of the Order of the Federal Republic MFR by the Nigerian government for her contribution to the growth of Nollywood in Nigeria. She is the owner of St. Genevieve clothing line. She has a sponsorship deals with MTN, GLO, Amstel Malta, Etisalat and Jumia. Her movie Lion Heart is the first movie in Nigeria to receive Oscar nominee.  She has an estimated net worth of $5 million.

Genevieve Nnaji has been in the Nigerian movie industry for more than 10 years, graduating from acting home videos to acting cinema standard movies and even producing and directing her own movies. In 2018, Genevieve Nnaji alongside Chinny Onwugbenu produced Lion heart, Nigeria’s first Oscar submission. Although the movie was disqualified by the academy, it was a pivotal moment for the Nigerian movie industry. Genevieve Nnaji charge nothing less than N3 million per movie role. She is also a brand ambassador to local and international brands.

She is the owner of a 2013 Mercedes-Benz G-wagon that has a 5.5 Litre V8 engine that produces 388 horsepower and 391 lb-ft of torque. It can get to a top speed of 135 mph. Some of its in-built features are dual-zone automatic climate control, navigation, satellite radio, a Harman Kardon stereo system, Bluetooth, blind spot monitoring, a rear-view camera, etc. To acquire the car she spent up to N50 million.