A Nigerian man is currently in hot waters after ramming his into a coffin shop with his car following a reckless driving. 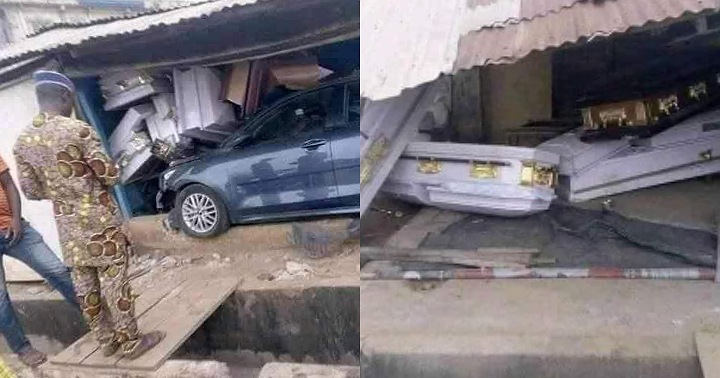 The man had lost control of his car and due to that rammed into a shop that sells coffins and destroyed the caskets nicely displayed for sale.

A Facebook user identified as Chukwuemeka Johnson shared this news on his timeline and according to him, this unfortunate incident occurred at the Ikorodu axis of Lagos state.

According to Chukwuemeka Johnson, the embittered and angry casket dealer and shop owner demanded the full purchase of all the affected caskets in the shop from the driver who rammed into his shop.

Meanwhile, a male school teacher was rendered powerless in class after one of the female students decided to turn the classroom into a nightclub in South Africa.

In what appeared as a creative class that was in session, students were given the chance to display their God-given talents as part of the learning process and one of the young teenage school girls decided to show off her dancing skills.

A video making rounds online currently show the girl clad in a short school uniform dancing wildly in front of him whilst seated on his chair.

The teacher was mesmerized by the student’s display of adult moves as she coupled her dance with certain suggestive gestures. Her classmates cheered her on as she gave their school teacher a field day.