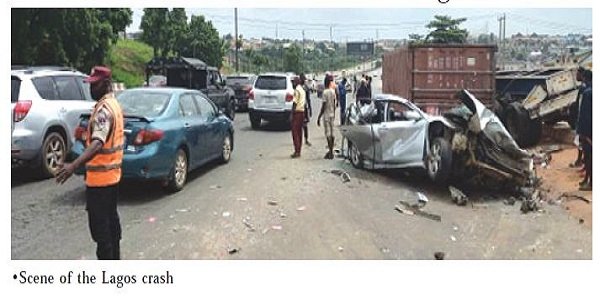 Sixteen commuters have died in two crashes in Osun State.

The first accident happened on Ijesa-Akure Road on Saturday, claiming 14 lives, while two persons  died in the second crash on Gbongan-Osogbo Expressway yesterday.

One person died while two were injured in a crash on Otedola Bridge, Lagos on Sunday.

In the Saturday incident in Osun, a Sienna vehicle collided head-on with a truck, causing a gridlock.

Road Safety officals were on the scene to evacuate the remains of the passengers and to clear the gridlock, a witness said.

The second Osun crash happened about 12:40pm in the Niger Cat area, after Babalakin Hall.

A Toyota Previa minibus suddenly lost control due to speeding, resulting in the death of two passengers, it was said.

One Lawal was said to have died in the Lagos accident, which involved three vehicles on Otedola Bridge.

Although the cause of the accident was not stated, the FRSC said the truck driver fled the scene before the arrival of emergency workers.

“He reiterated that there is no backing down on battle against vehicles without minimum safety standard on Lagos roads.